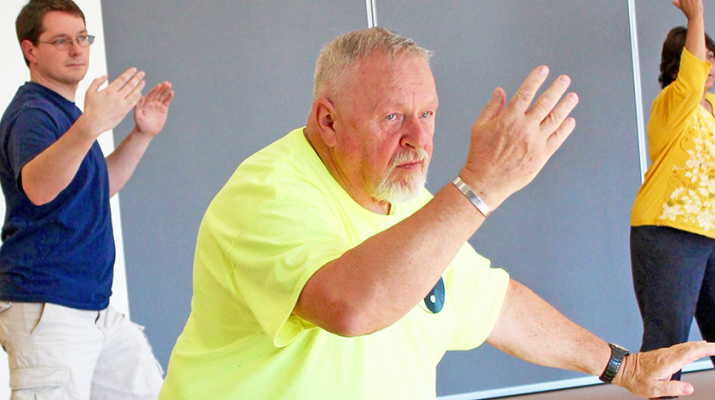 A seventh-degree master of martial arts, David Root is a tai chi sensei at the Henrietta Recreation Center on Fridays. He’s done the same in Gates, Penfield and Greece — over a 30-year span.

If you were of a certain age and could spend a little bit of your time every day doing something that would benefit you enormously, you would, wouldn’t you?

This something doesn’t require any special equipment. No special clothing. You can do it even in the smallest apartment — or outdoors anywhere.

You need some help to learn it, that’s true. But millions, maybe billions of people know how.

And the benefits to you?

• Less stress, by the bucketful.

• A better mood (That alone will have your wife pay for lessons!).

You say: What can do all that?

Dave Root and the Mayo Clinic.

The ancient Chinese martial arts discipline has evolved into a graceful form of exercise that’s extolled on the Mayo Clinic website.

Closer to home, Root, a seventh-degree master of martial arts, is a tai chi sensei at the Henrietta Recreation Center on Fridays. He’s done the same in Gates, Penfield and Greece — over a 30-year span. And his former students have taken over some of his classes, doing for others what Root has done for them.

“I’m spreading the gospel to everyone so they can pick up on the things tai chi can do for you,” Root said.

He comes across right away as someone sincerely interested in other people, someone who believes he can help you in ways you don’t know yet.

He is such a thorough teacher that his students have gone on to become tai chi instructors themselves, providing the ultimate respect for a man they revere.

Root, 68, from Rochester, learned martial arts in the Marines a long time ago.

“They didn’t call it ‘martial arts’ then, “ he said. “It was ‘hand-to-hand combat.’ The instructor stood on a platform in a field and there were a thousand of us out there.”

When Root settled down with his family after his time in the service, working for Cole Muffler as a manager, he got a flyer about a kids’ martial arts program.

He was married to wife Marty for 25 years, and they have four children (Regy, Summer, Haley and Dustin). The marriage ended, but he and Marty remain close. “She is still my best friend,” Root says. Their now-adult kids, and Root’s seven grandchildren, all live within a mile of one another.

“When the kids were little, I tried to get them all interested in martial arts. Some of them didn’t want to go to class alone, so Root tagged along…and met his old Marine instructor there, teaching the class.

Thus began a journey for Root through the School of Universal Martial Arts, where he is now a board member after mastering karate, judo, aikido…and tai chi.

“It takes a long time to move up the ranks (of each discipline), but if you stick with it long enough, you learn a lot. When I got a little older, tai chi was nice — it doesn’t demand that much from you, but you can get much more out of it.”

A consummate and patient teacher, Root likes to watch people, analyzing how tai chi could help them. “Right now, you’re not in good balance,” he tells the guy interviewing him. It’s unnerving, but comforting, because you immediately want to know how to fix something.

“I like to teach people who want to learn,” he said. “What I do, when we do something in class, I explain to them what they’re doing for their health and the martial arts. I don’t expect older people to be in it for the martial arts, but sometimes, they’re so interested, it helps in tai chi. The tai chi I teach is 108 moves, with three sections to it. I teach the first section, and when they have that down, I teach the second until they have that down, then the third.”

Those 108 moves can take as little as five or six minutes if you’re moving right along. “Most people don’t do that, they take their time, especially when they’re our age,” he said. “One of the things I do when I get new people in, I ask, ‘Does anyone have any problems? Shoulder? Knee? Hand?’ I want that information, so I can explain to them why I do what I do. As we go along, I see people progress.”

The rhythmic grace of tai chi is compelling.

Root: “I’m spreading the gospel to everyone so they can pick up on the things tai chi can do for you,” he says.

Root doesn’t look like the whisper-thin tai chi instructor you might have in your mind’s eye. He’s enjoyed life along the way, and has an undeniable twinkle in his eye, despite the issues that arise over the years.

“I have spinal stenosis, GERD, high blood pressure…I have a lot of problems. When I do my tai chi, nothing bothers me: everything is good, I don’t have any problems, until an hour later. When you’re doing tai chi, you acquire a feeling of grace that all matters go away.

“Doctors will refer patients for tai chi, people with bad knees, bad hips, bad shoulders…it will straighten things out. I’ve taught people how to walk upstairs. And for the ones who want to exercise, I’ve taught them how to walk downstairs. I will stay here teaching in Henrietta for awhile until I get someone in my class who can take over for me.”

He said the patience people see when watching someone practice tai chi is a lesson for those who want to learn it.

“After a session — people won’t see the difference right away. While they’re here, my job is to flood the mind. Mind-body-spirit: the mind has to learn the pattern, the body has to create that pattern, what you’re doing in that pattern is the spirit. I tell people, after the first day, if you can remember one thing — when you come the second time, you’ll learn one more. In eight weeks, we’re going to pick up quite a bit.”

The fee to take his class in Henrietta is $25. “I’m trying to keep the price down so more people can afford it. Some of these people are living on social security alone,” he said. But they get a lot of Dave Root for $25 — his experience, his patience, his ability to explain and point out and prove to someone they can change and improve.

People from outside Henrietta can sign up for his classes, but he added there may be a small additional fee for out-of-towners.

“Once my students find out how every body moves, they find it easier to do yard work, shoveling, because they’re not using their muscle, they’re using their body. Tai chi helps in multiple ways.

“It’s not,” Root argues. “Tai chi is a way of protecting yourself. You’re not going up to do damage to anybody, you’re protecting what’s yours, your life or someone else’s,” he said. “The Chinese believe that one ounce of energy can move a thousand pounds.”

• Editor’s Note: To sign up for tai chi classes taught by David Root, visit the town of Henrietta website — parksandrecreation.henrietta.org — or call 585-359-2540. The fee to take his class in Henrietta is $25.