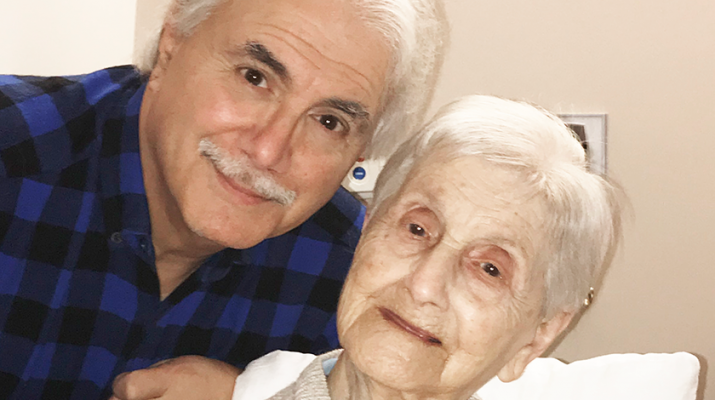 Celebrating 105 years of life was certainly a huge milestone for Buffalo native Mary Pecoraro, who marked her Dec. 23 birthday surrounded by loving family and friends.

“Mary had a really fantastic time. They did a really nice job. She had her hair done and my sister, Lucille, bought her a new outfit,” said Pecoraro’s son, George, 72, who has always been very close with his mom and loves to joke around with her.

Mary Pecoraro, who lives at HighPointe on Michigan, a nursing home in Buffalo, has lived through major U.S historical events including the Great Depression, World War I and II, prohibition, the sinking of the Titanic, the Civil Rights Movement, the women’s suffrage movement and the assassination of John F. Kennedy.

On her 101st birthday she received congratulatory letters from Barack and Michelle Obama, as well as Pope Francis.

Pecoraro has no major medical issues to date except she can no longer hear. She’s still very socially engaged and enjoys coffee with other residents, reading the newspaper and going for daily assisted walks. She has a brightness to her that defies her age, and although she can’t hear, she offered up many smiles during my interview and even invited me to come back to visit.

“I never thought I’d get to see my mom turn 105,” said George Pecoraro. “She has always been very loved by the people around her. We live day-to-day with her, and moving forward I’d like to celebrate another birthday… I’m wondering if she’ll outlive me.”

George Pecoraro says he has dodged a few health bullets, having survived cancer and open-heart surgery. He said his mother’s health history has been much stronger than his, and any health conditions that run in their family bypassed her.

So what can be credited to her longevity? “It’s all about love,” George Pecoraro said. “We’re a very close family. She’s always had very strong bonds. Even at HighPointe, people love her and she loves them. Her life has always consisted of love.”

As the family story goes, Mary Pecoraro was actually conceived on her parents’ way over from Sicily, Italy, on the boat they took to the U.S. Her father was one of the original stonemasons in the city of Buffalo, and her mother was a housewife caring for their nine children. Pecoraro spent much of her life helping care for her siblings until her 30s when she met the love of her life, her husband Russell. She was a homemaker to her two children, George and Lucille, and loved to cook.

“She learned from my grandmother. During Christmas season all of her sisters would get together and cook all day. Believe me, you ate all day, and you had to eat because they’d stand over you and watch you,” George Pecoraro said.

Russell died at 67 years old from heart failure and to this day remains Mary’s one true love. Mary Pecoraro’s sister, Josephine, who is 92 years old, was Mary’s caretaker until she joined the HighPointe community.